Company: PET and cans are the highestselling products. The warehouse has a capacity of around 20,000 pallets.

A few years ago, Coca-Cola HBC had an analysis conducted of the transition from gas to electric lift trucks. The prognosis was confirmed, even in the demanding operating environment of the beverage industry, and the company saved one fifth of its operating costs thanks to the new fleet. A number of safety features also contributed to this result. Last year, Coca- Coca-Cola HBC fine-tuned the fleet and is now considering automation.

Coca-Cola Hellenic Bottling Company‘s main operation in the Czech Republic is the production of beverages on the outskirts of Prague. It is an older plant, yet one that is constantly changing. A few years ago, for example, they introduced a new aseptic line, which is an automated production line used to pack beverages into special containers in a sterile environment. In addition, there are four other production, or rather filling lines at the Kyje plant, where beverages roll off in different packages. Preforms from which PET bottles are blown are also produced here.

The busiest point is at the outlet of the filling line for PET bottles and cans, which are the highest-selling products in the company’s portfolio. An automatic wrapping machine packs pallets of products, prints labels with the SSCC code and sends them to the conveyor. Heavy-duty electric fork-lift trucks pick up three pallets in regular sequence and move them to block storage according to instructions from the WMS system. From there, they are loaded, once again three pallets at a time, from the ground straight onto lorries parked under shelter at the side of the warehouse.

It‘s relatively effective. For fast-moving consumer goods, which is the majority of products at the plant, quick transfer through block storage pays off. We have ramps at the distribution centre, where pallets must first be stored in the transfer zone before being placed in racks. On shipment, they are removed from racks, placed in the transfer zone and from there onto a lorry. In case of slower moving products at distribution centres, it pays to use racks,“ explains Jan Turek, Supply Chain Manager at Coca-Cola HBC Czech Republic and Slovakia.

Four years ago, Coca-Cola HBC plants in the Czech Republic and Slovakia underwent an audit to recommend whether or not to switch from gas to electric lift trucks. „These are quite big machines and they’re used to full capacity, so we were worried whether electric machines would be strong enough to handle the load, whether batteries would last, etc. Even the speed was a little slower than gas trucks,“ said Jan Turek.

When the company announced a tender for handling equipment in 2013, it included both gas and electric versions in the competition, and at the same time asked candidates to provide a feasibility study of the switch to electric drive. One of the competing companies provided an analysis by Dynamic Future, which was rated as the best quality. This consulting company subsequently conducted a more detailed simulation and analysis that confirmed electric lift trucks could handle operations.

The winner of the tender, STILL, subsequently supplied a fleet of electric lift trucks. This included almost seventy machines for not only the central warehouse, but also the distribution centres in Prague and Brno. The foundation of the fleet is forklift trucks with a load capacity of five and three tons and lighter trucks with a load capacity of 1.6 tons. The fleet is complemented by hand pallet trucks, tugger trains and low-lift pallet trucks for ramp loading and picking.

The switch to electric lift trucks meant cost savings of 22 percent. „But there were other benefits too. For example, emission-free operation has greatly improved air quality at the plant, and goods are not as dusty,“ says Jan Turek.

The trucks also came with a range of safety features such as cabin protection grilles, protective frames on the fork carriage, warning roof lights, reversing acoustic signal, blue reversing light, reduction of speed when cornering or panoramic interior rear-view mirrors, says Václav Kopecký from STILL CR, who was responsible for the project on behalf of the supplier.

Aside from full service, services included in operative leasing include washing lift trucks and fleet management. „We have an overview of truck use, empty trips, etc., so every once in a while we sit down and perhaps cancel an unused truck. Fleet management also monitors impacts, where a sensor automatically disables the truck when it runs into something,“ explained Jan Turek. The only one who can unlock an immobilised truck is the shift manager. Previously, there were incidents where drivers left the scene of an accident, which is now impossible. The number of accidents has thus decreased considerably, added Turek.

Although the tender for handling equipment took place at the same time for the Czech Republic and Slovakia, Coca-Cola HBC decided on different companies in each country. STILL won the Czech tender, but last year also won the Slovak one.

The beverage company took advantage of the option of a three-year contract in the Czech Republic and partially changed and fine-tuned its fleet. For example, it ceased using one of the counterbalance forklift trucks, which was used to transfer products from production lines, for block storage and to load lorries, while a new reach truck began working on the pallet flow rack system at the cross-dock in Brno, says Václav Kopecký from STILL.

Changes in the handling fleet also related to minor changes in warehouse layout, which were based on the simulation of operation and analysis of truck movements and turnover of goods. „While we have our own tools at Hellenic, one shouldn’t be too proud to think they do everything the best. That‘s why I wanted to try external tools as well. Although we didn’t achieve a great benefit, at least we confirmed that we’re not doing badly,“ said Jan Turek.

And adds: „Kyje is our oldest plant, which is also quite effective. However, we would like to introduce partial automation here, like our Austrian operation or at Škodovka, and dispatch pallets from production lines to a transfer point for a new warehouse using AGV.“ 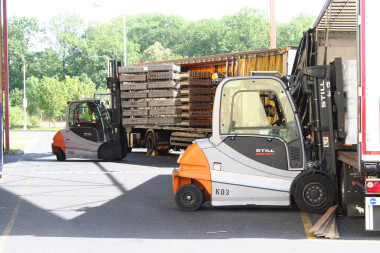 By selecting "Accept tracking" you allow STILL to use cookies, pixels, tags and similar technologies. You can also make your own selection and save it with "Save my selection". Please note that based on your settings, not all functionalities of the site may be available. For more information, please see our privacy policy.